Protect your Pigs from Flies with Maggots Larvicide 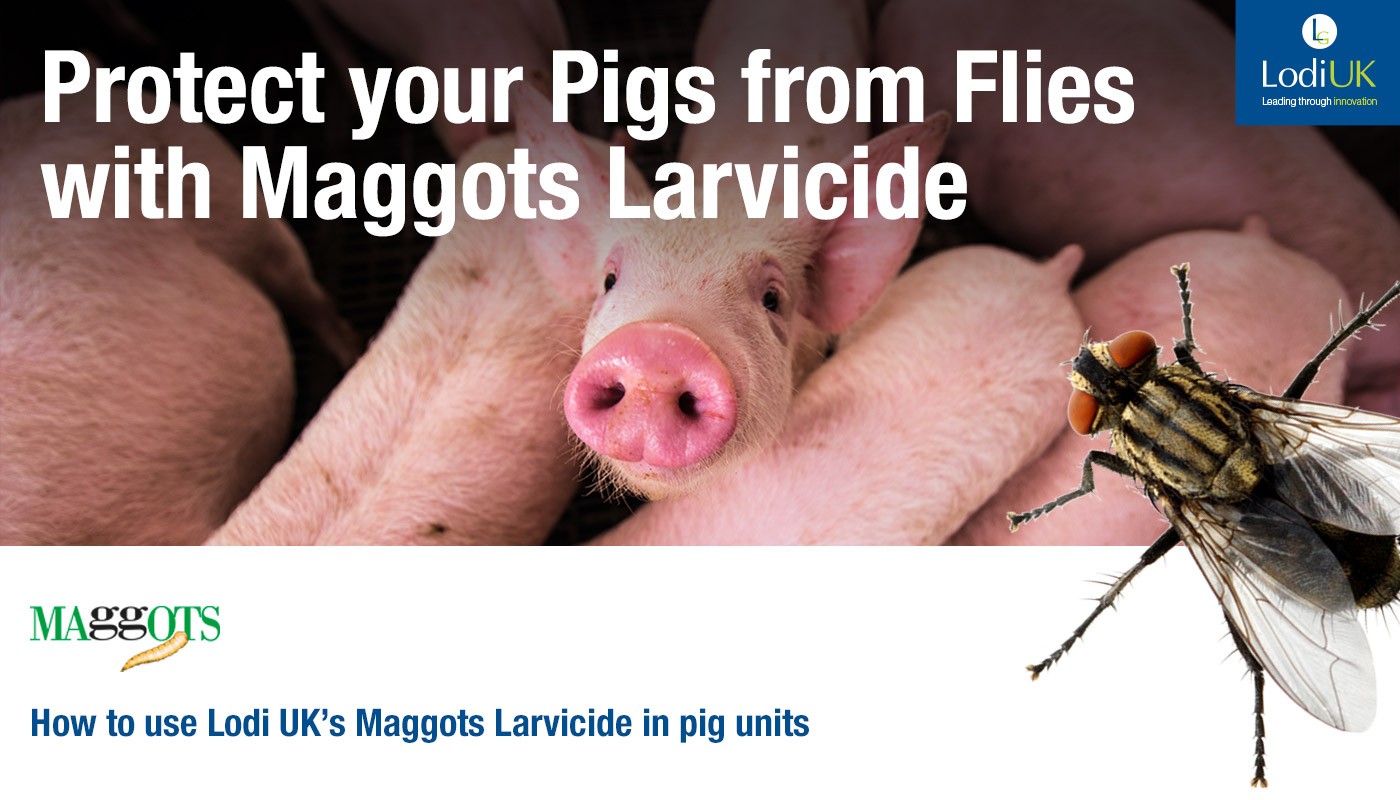 If you keep up to date with Lodi’s other agricultural blogs, you’ll know that flies can cost pig & poultry farmers can lose as much as 10% in growth rates and egg production. In this blog, we’ll go more in-depth to find out just how much a fly infestation in your pig units could be costing you and what you can do to prevent it – before it even happens! 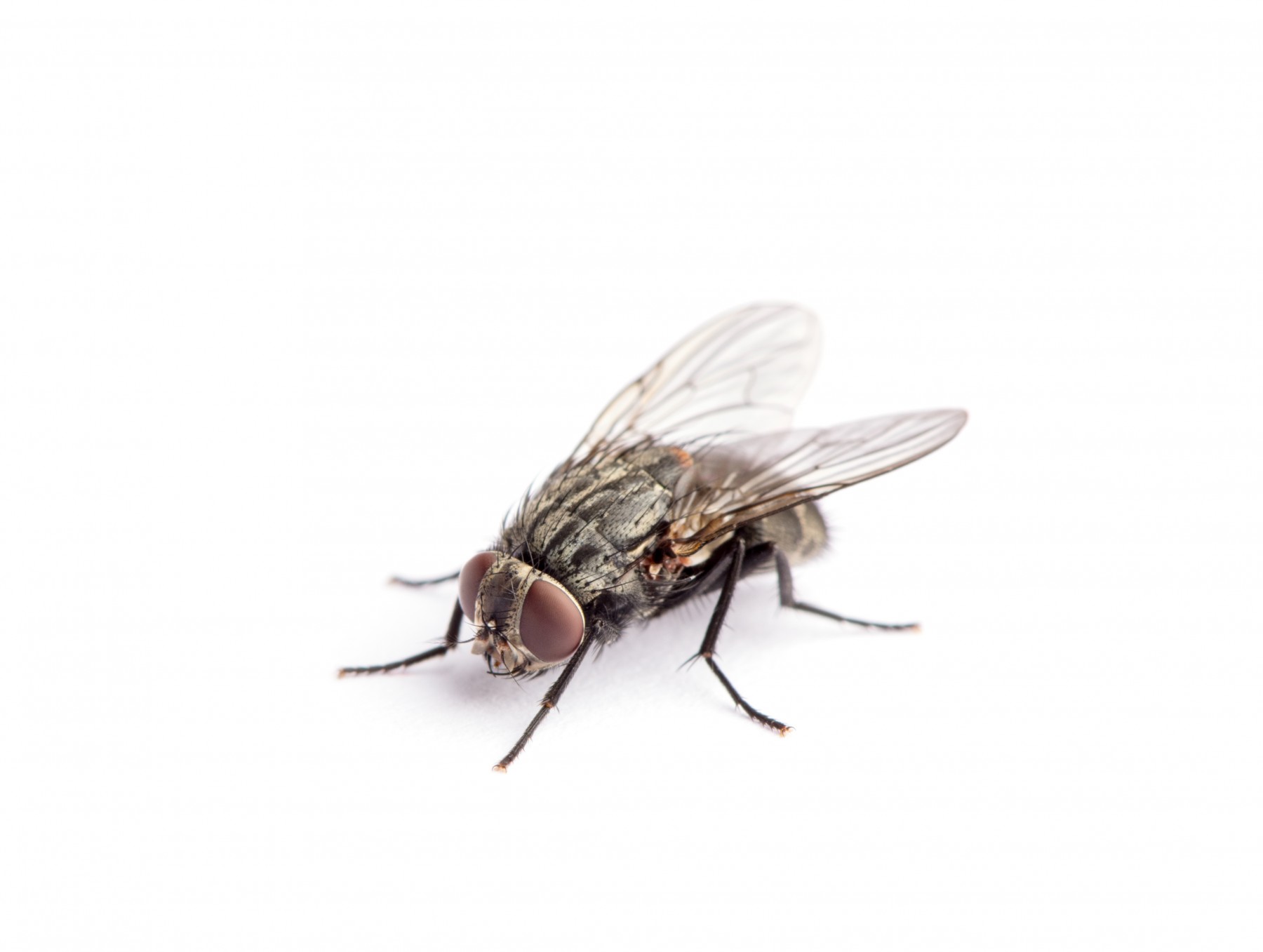 20 fly species typically affect livestock, but the common housefly (Musca domestica) is the most likely to infest pig housing.  Generally, flies breed in rotting organic matter. Organic waste, like manure, provides the fly larvae with plenty of nutrients and moisture. Fly eggs need constant moisture for them to hatch.  The ideal moisture content for larval development is between 50-85%. Swine pit manure contains between 94-96% moisture. When the pigs are bedded, the level of solids is likely to be much higher due to the substrate e.g. straw.

Fly infestations are thought of as more of a summer problem. Fly populations tend to grow as the temperature rises during the summer months. However, fly infestations can also occur during cooler weather in outdoor pig systems as the temperature inside manure is higher. Pig units are kept between 20 and 30⁰ (the thermo-neutral zone for swine) to maximise productivity, which makes them liable to become infested with flies year-round.

The speed of the house fly’s life cycle is highly dependent on the temperature. Female flies can lay a maximum of 350 eggs over four days at temperatures between 25-30⁰c. Once the egg hatches into a larva, the growth rate can vary wildly depending on the temperature of its surroundings.

They can carry diseases

Flies are vectors for over 100 different diseases. These can include, E.coli, swine dysentery, African swine fever virus and salmonella. Flies can also harbour parasites such as tapeworms, roundworms and hookworms.

Scientists have studied Musca domestica’s genome and have found that have a large number of genes for immune response and defence. They also have more cytochrome P450s (which help to metabolise toxins) than the researchers expected. Flies also have many genes for chemoreceptors which enable the flies to sense their environment. The researchers aren’t sure why the flies have so many of these genes. It might explain why they’re so good at moving out of the way of fly swatters, finding food, and can live in muck heaps without getting sick!

Flies are a major carrier of Porcine Reproductive and Respiratory Syndrome (PRRS). It’s estimated that PRRS cost the European pig industry €1.5bn a year.  PRRS is caused by a virus that can affect pigs at all stages of their lifecycle. As the name indicates, this can affect respiration in young pigs and fertility in sows and gilts. In infected piglets, the growth rate could be reduced by over 25% in the 4 weeks after weaning. Up to 10% can fade and die in severe cases.

MRSA (Methicillin-resistant Staphylococcus aureus) are bacteria that are resistant to some of the most commonly used antibiotics. They mainly cause mild skin infections, but they can become life-threatening, especially in immuno-compromised, like hospitals. A Danish study this year found that livestock-associated MRSA can be widely spread from affected pig farms.  27% of the flies were infected with LA-MRSA and it’s estimated that 7.8% of them could still test positive even after 24 hours of leaving the farm. They could still be infected 4 days later. This could mean that these flies could cause enormous problems when the farm is too close to health services or hospitals.

They can cause problems with the public

Fly infestations can also get you into trouble with the local authorities as well! The Clean Neighbourhoods and Environment Act of 2005 gave councils the power to visit & inspect businesses if there are complaints of flies. An Abatement Notice can be issued if excessive amounts of flies are found, meaning that the flies must be controlled. Failure to comply with an Abatement Notice is an offence and can carry a fine of up to £20,000.

They can affect your profits

Research suggests that if a pig finisher unit with a moderate fly infestation takes 121 days to get the pigs to weight, but where the flies were controlled, it only took 109 days. This increase of 11% might not seem like a lot, but this increase in feed, heating and labour costs has a huge knock-on when the margins are so tight. Lengthening the time to market could increase the feed cost by €15,000 per pig house.

How to control flies on your farm

As flies can be a persistent pest, the only way to tackle flies effectively is with an integrated plan that uses a variety of methods to eliminate them. 80% of the fly’s life cycle is spent in the egg, larval and pupal stages so it makes sense to target these phases.

Monitoring the fly population is the first step to successful control. Using Digrain Fly Reel Kits, Digrain Fly Reel Glue Rolls or Organ-X Pro-Formula Fly Trap XLs provides real-time information on fly numbers. Monitoring around the farm will allow you to see the ‘problem’ areas which may need more attention to bring back under control. It can warn you of an impending fly crisis by establishing a ‘normal’ level of flies on-farm. If you notice the level starting to rise, it can be a sign to begin or step up the treatments.

Intensifying efforts to improve on-farm hygiene can play a huge role in conquering fly problems. Wet, dirty bedding is the ideal place for flies to breed. Increasing the frequency that bedding is removed reduces the likelihood that maggots will be able to hatch successfully and will break the life cycle. Don’t forget to concentrate on places where dirt can accumulate, like in corners or under feeders & drinkers.

Ensuring the correct airflow rate can also help reduce the fly burden by helping to dry out the wet substrate.

An all-in all-out system will allow you to use the short gap in between batches to clean, disinfect and dry the unit. A thorough cleaning regime cannot be overlooked in the fight against fly infestations. It will also prevent any insect-borne diseases from being passed from the older pigs to the piglets.

Where there are pigs, there will always be muck. Clearing the straw from the pig housing will reduce the flies around the pigs, but the eggs and larvae will still be in the muckheap. It is also not always possible to clean the slurry out in a slatted floor system.  Using a larvicide will target the majority of their life cycle and disrupt the infestation before it begins. Lodi’s Maggots Granular Larvicide contains the growth regulator cyromazine. For best results simply dilute in water and spray on slurry and apply every 4 inches of muck fall. It can also be sprinkled on moist muck areas where the prills can remain near the surface. Do not apply loose maggot prills where they can possibly sink to the bottom of the slurry as the larvae will live in the top 4 inches of muck fall.

Dr Kai Sievert, an expert in on-farm pest control, suggests spraying just a third of the walls with insecticide which will achieve a 98% control but at a lower cost. This is also a good anti-resistance strategy.

There is evidence that it’s possible to control house flies by feeding sheep and cattle the bacteria Bacillus thuringiensis. Bacillus thuringiensis produces delta-endotoxins which are lethal to insects but are not thought to be harmful to mammals in small doses. These endotoxins disrupt the fly’s lifecycle by killing the larvae which often feed on the animals' manure.  The maximum control (32%) of house fly larvae in the manure came at a feeding rate of 3200 ppm. Although there has been research into controlling parasites like worms by using Bacillus thuringiensis in pigs, there has been no research as yet in using the bacteria to control fly infestations in pig housing. 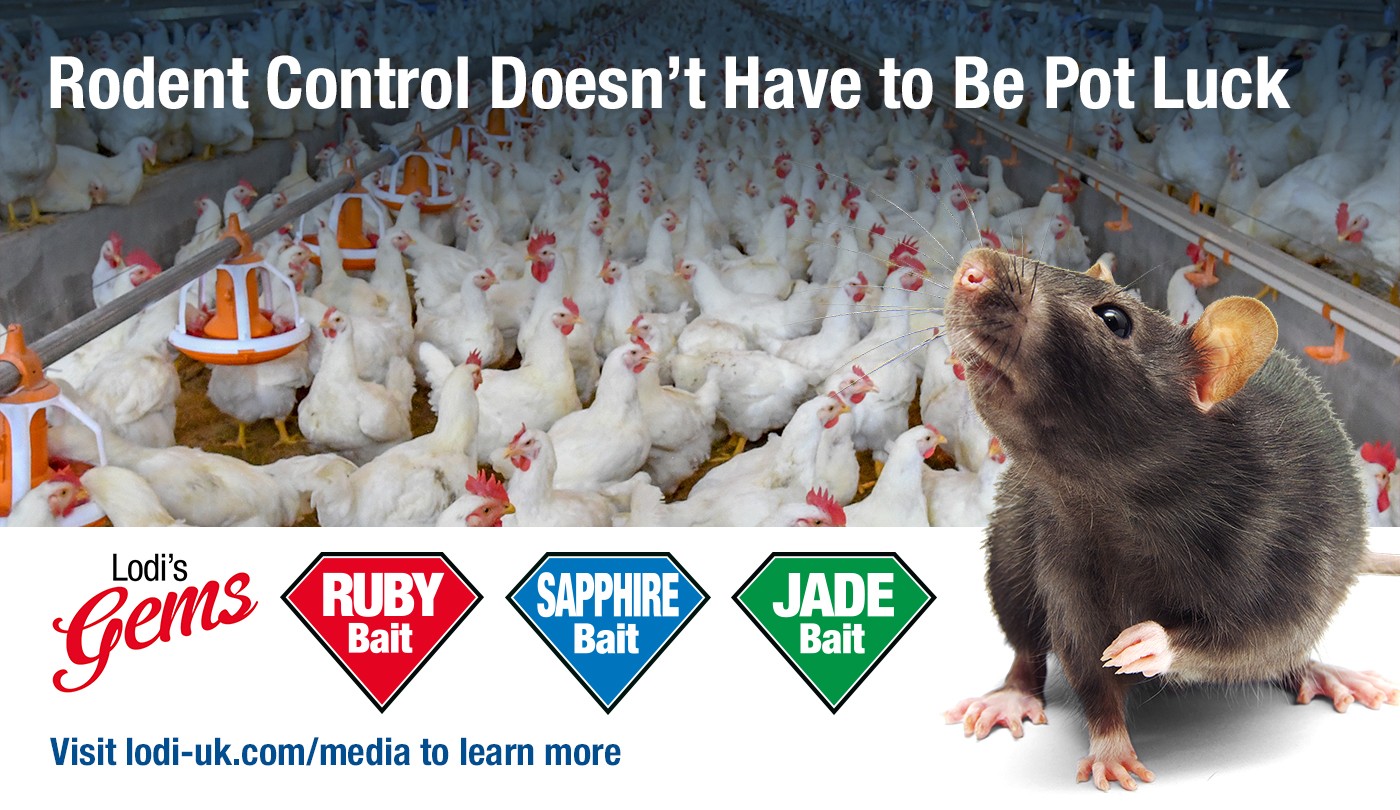 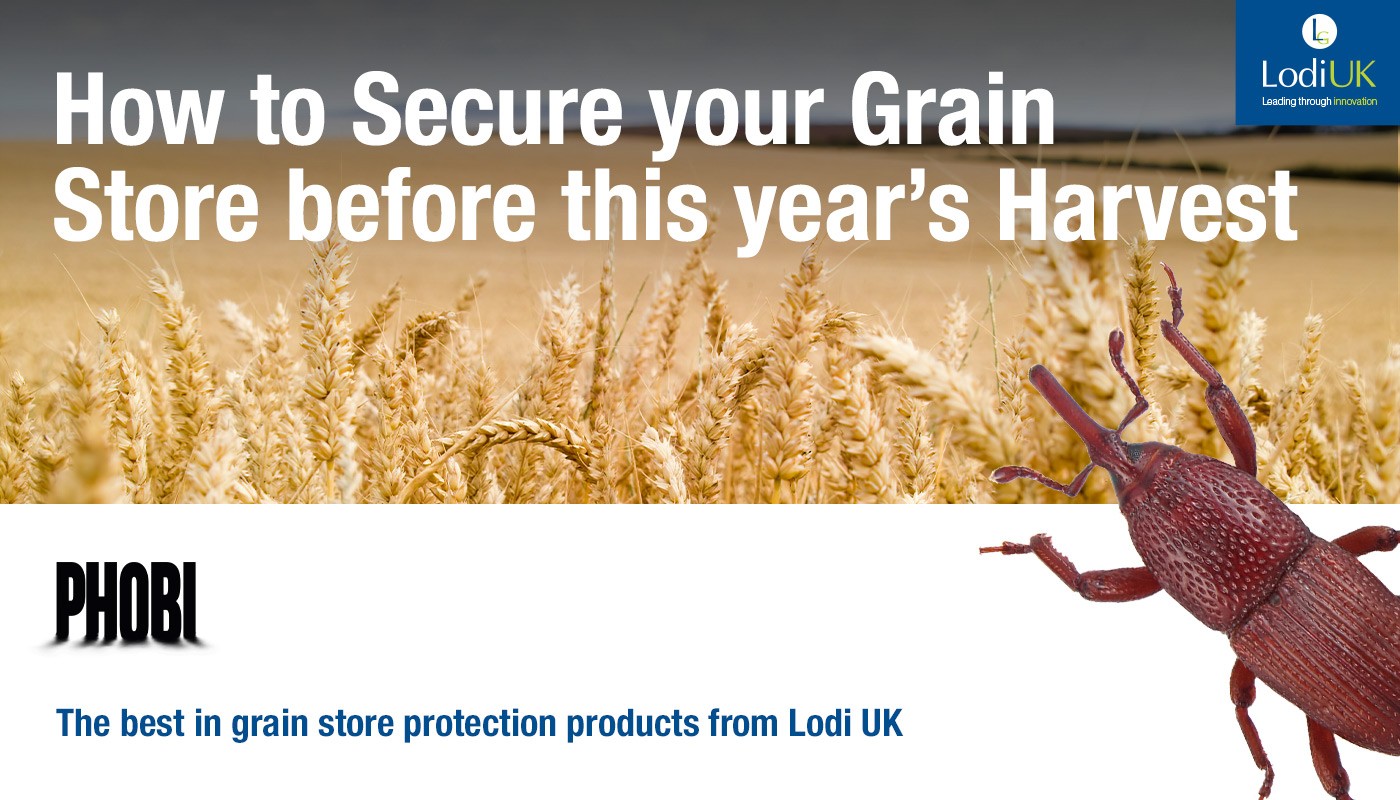 How to Secure your Grain Store Before this Year's Harvest