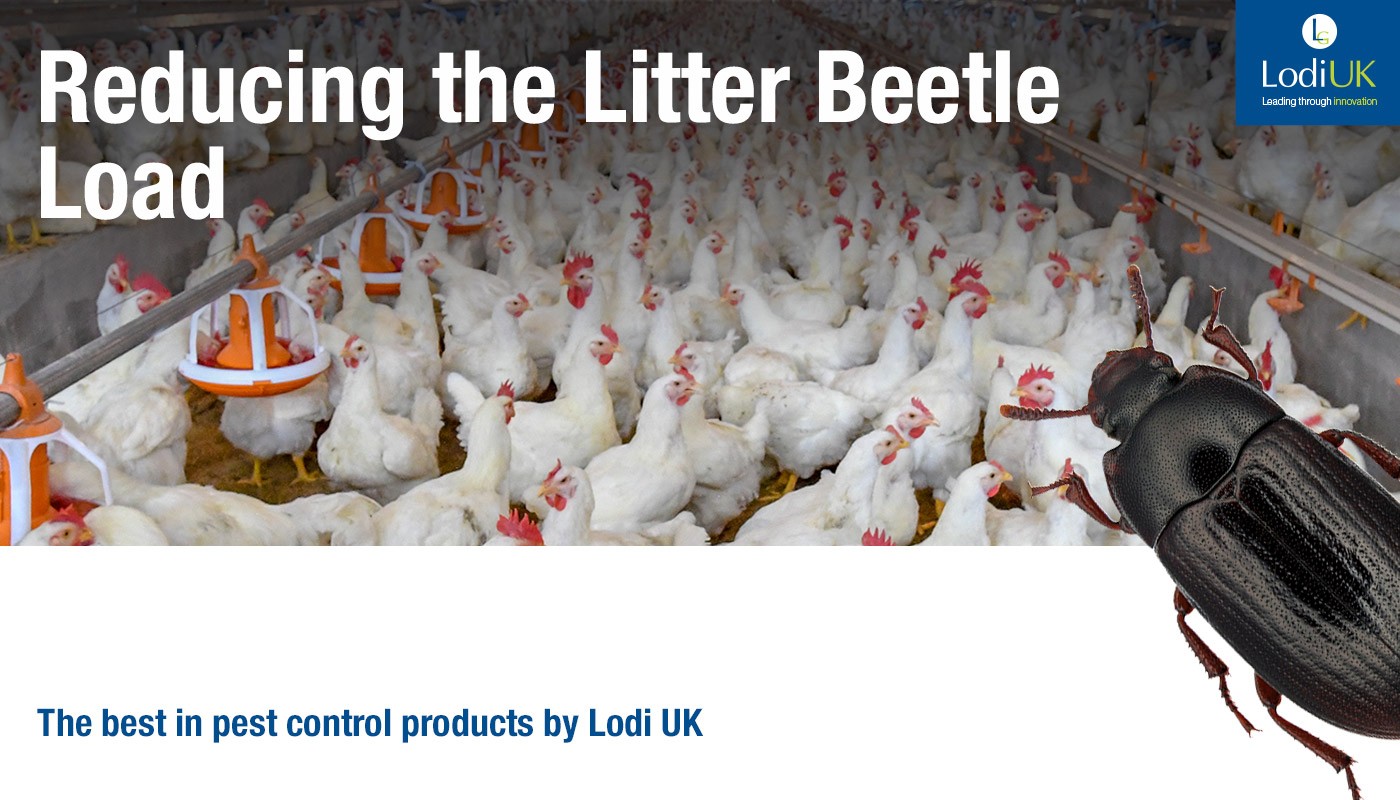 Litter beetles (Alphitobius diaperinus), also known as lesser mealworms, are one of the worst pests that you get as a poultry farmer. They reproduce quickly, carry diseases, damage buildings and are a nightmare to control!

In recent years, there has been a population explosion of litter beetles inside poultry housing. The beetles are thought to have originated from sub-Saharan Africa so are prefer warmer climates. As the global temperature continues to rise, they are likely to spread and become even more of a nuisance. Alison Colville-Hyde, field services manager at St David’s Poultry Team, gives a few more reasons as to why they have become such a problem in recent years - “perhaps the popularity of biomass boilers means farmers are heating their sheds for longer, or maybe producers haven’t been able to kill them successfully so numbers have become out of control.”

They can enter easily poultry housing as they are present in the environment and are so prevalent in the poultry industry. They can be carried into units on packaging, egg trays and transportation crates.

Lesser mealworms are found in all kinds of poultry units, e.g. broilers, laying hens, ducks. They tend to be in higher numbers in sheds that house laying hens as the turnaround between the crops is much slower, meaning that there cannot be the same level of control as in broiler hens.

How to identify litter beetles?

Litter beetles are oval-shaped and approximately 5.5-6.8mm long with two antennas. They tend to be black or brownish-black, although the exact colour depends on the age and ‘strain’ of the beetle. They are shiny and their hard shells are lightly striped with impressions.

Litter beetle larvae have a segmented body with three pairs of legs in the front third. They can be between 7 to 11mm long and range in colour from milky white to brown depending on the stage in the life cycle. The pupae look very similar but are shorter (6-8mm) and have the legs tucked alongside their body.

Average female litter beetles lay 400 eggs in their year-long life, but they could potentially lay as many as 2000. The eggs are around 1.5mm in length, with slightly rounded ends, and range in colour from white to tan. As the eggs are so small and sticky, they can easily become covered in dust and become impossible to see. Within a week, they hatch into larvae. The larvae are very active and are able to move avoid light and feed – they can even crawl onto and feed on weak birds! After a month, they fully grown and ready to emerge. Under the ideal conditions – 30-33– the lifecycle can take as little as 5 weeks.

Litter beetles are not considered a grain store pest as they are mostly found in poultry housing. However, they can be classed as a secondary grain pest as they feed on grains that have already been damaged. Grain spoilt by moulds is particularly susceptible.

They can also chew on the litter of poultry units, causing it to turn into a powder. This can cause respiratory distress and meaning the litter needs to be replaced more often.

When the litter beetle larvae are ready to pupate, they will burrow into floors and walls. Once they have become adults, they emerge and further damage the walls. They can chew through Styrofoam, fibreglass and polystyrene insulation. This damage can cause significant damage and lead to increased heating costs. The insulation will also need to be replaced – leading to additional repair costs. In one study, it was found that heating costs were 67% higher in houses with beetle damage.

Lesser mealworms are known carriers of over 60 poultry diseases. These include avian influenza, Newcastle disease, Aspergillus, and parasites like coccidiosis and roundworm. Litter beetles are also intermediate hosts for poultry tapeworms and cecal worms. They are able to carry 26 pathogenic types of E. coli for 12 days and Salmonella spp. for 28 days. This can infect the next flock.

As insects are a natural food source for chickens, they are irresistible. Eating just one larva or adult infected with salmonella can pass the disease along to a day-old chick. The beetles are more of a problem in floor-litter systems such as breeding and broilers.

They can affect flock performance

As well as reducing performance through disease, litter beetles can also decrease growth rates and egg production by becoming the primary food source. Litter beetles can eat significant amounts of feed. Due to this, they are attracted to poultry feed lines and pans and often congregate. Birds may choose to feed on the birds rather than their rations, which fills their digestive system with the hard, indigestible shells of the insects.

There is older evidence from North Carolina State University in 1995 to suggest that when litter beetle larvae are present in poultry chick feed, the chicks growth rate was significantly higher than when the larvae were absent. They did admit that as the larvae are reservoirs for disease, this increase in growth rate is short-lived as the birds may become infected.

In heavy infestations and hot weather, the beetles are unable to find enough moisture in the litter and will bite birds around their feathers and vents.

How can you control litter beetles?

Like most poultry pests, they cannot be controlled through cleaning alone. Due to their burrowing action, they can hide in walls during pressure washing or steam cleaning. Their tough exoskeleton means that pressure washing simply washes them off the wall and that they just walk back to the walls.

They are also hard to kill with sprayed insecticides. Not only do they remain inside the walls, but they can also bury themselves into the muck and litter, which makes direct contact extremely difficult. Litter beetles also move in large numbers which makes it even more difficult to make sure each beetle receives a lethal dose of the active ingredient.

Lodi’s technical expert, Dave Reece says that the best method of control is using Alphi WP Concentrate and painting it in a 15cm band around the base of the building. Painting concentrates the active so they will receive a higher dose as they walk across the band to get from the litter back into the walls.

If you have any questions about pest control products, email us at contact@lodi-uk.com and one of the experts on our team will help! 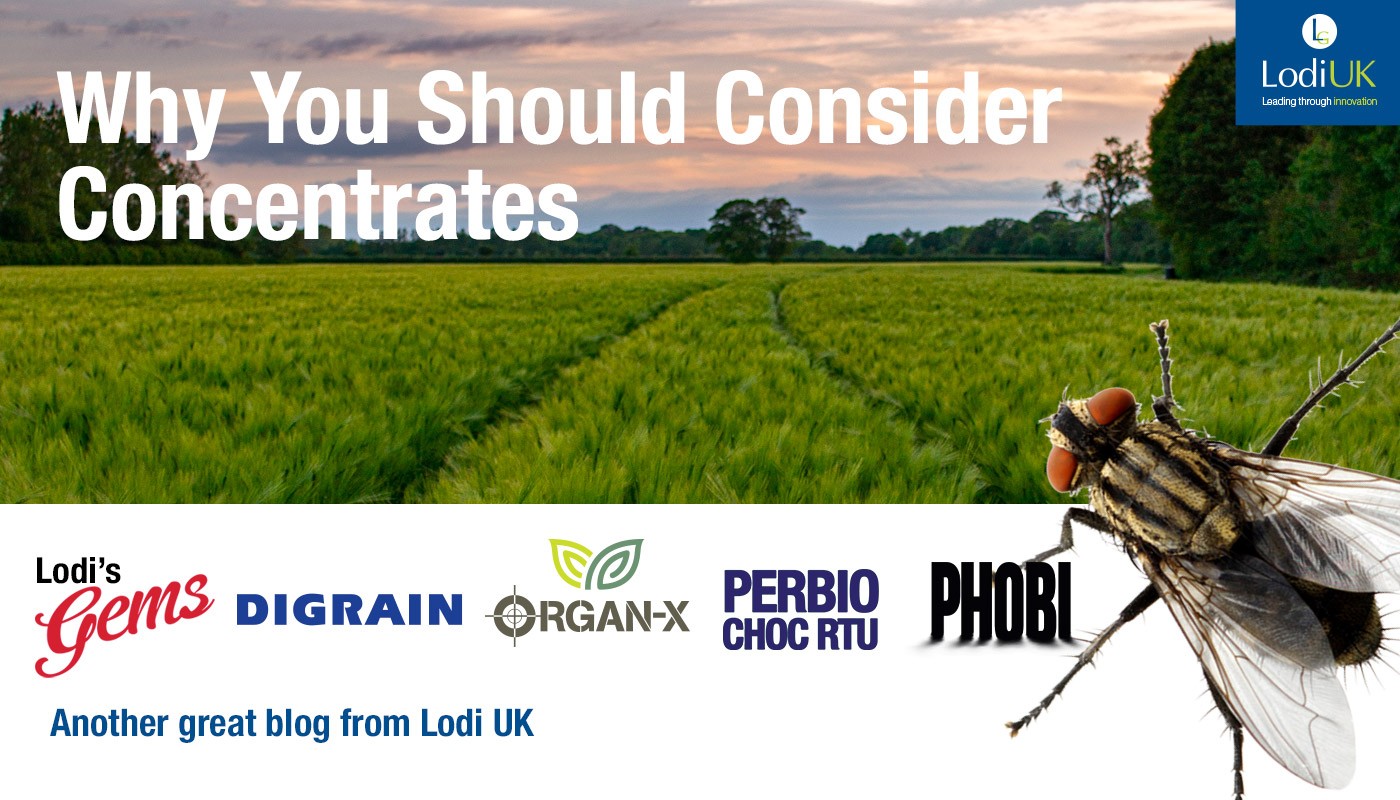 Why You Should Consider Concentrates

How to Get Rid of Stable Flies